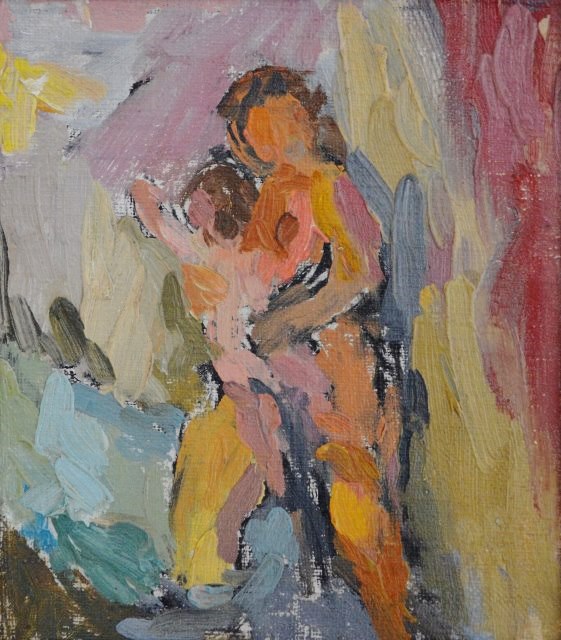 Artist Eugenie Baizerman rarely exhibited her work and never sold a painting during her lifetime. According to her husband, sculptor Saul Baizerman, although she sought a quiet life to focus on her work, she nevertheless experienced an inner turmoil that manifested itself in the free, expressionistic colours of her canvases.

Born Eugenie Silverman on October 14, 1899, in Warsaw, Poland, the artist grew up in Bessarabia and Odessa, Russia. Her family, from the Caucasus region, had artistic inclinations. Her grandfather collected Near Eastern art objects, while her mother was a semi-professional actor. Her father, a language teacher,

To encourage her artistic talent, the Silverman’s hired an art teacher who taught Eugenie a fine style of drawing and shading influenced by the ornamental design work then in vogue. She also studied at the Odessa Art School. When she was fourteen, the family immigrated to the United States. In New York City, she continued to study art at the National Academy of Design and later at the Educational Alliance, a settlement house located on the Lower East Side. Her student work, though finely drawn, was static and subdued in color, showing little of the dynamism that would mark her mature work.

In 1920, she met her future husband, the sculptor Saul Baizerman. The couple travelled to Italy and Paris, where Baizerman’s sense of colour was awakened. She began to paint in a neo-pointillist style, covering canvases with bright dots. Around 1927, her mature style, characterized by short strokes of vivid colour, emerged. She would paint under artificial light in the evenings, since her days were occupied with work in a garment factory and with caring for her daughter, Ugesie.

Fruits, flowers, and childhood memories of naked women bathing in the Black Sea were frequent subjects of Baizerman’s art. The garment factories where she worked were another source of inspiration. Toward the end of her life, she created landscape paintings of the deserts and mountains of Arizona.
In her canvases, the riotous colours create a constant tension between surface and depth, between foreground figures and the background. Recognizable forms such as nudes and still-life objects seem to occupy the same plane as the decorative background created by stippled brushstrokes. The artist often compared painting to music. The dynamic effects of her technique present sensations of colour and tone in movement.

The Artists Gallery was a great champion of her work, mounting one-woman exhibitions in 1938 and 1950, a husband-and-wife show in 1948, and a retrospective in 1961. A posthumous exhibition was held at the Krasner Gallery in 1964. More recently, her work was displayed at the Zabriskie Gallery in 1988. The Whitney Museum of American Art and the Museum of Modern Art in New York City have paintings by Baizerman in their collections.