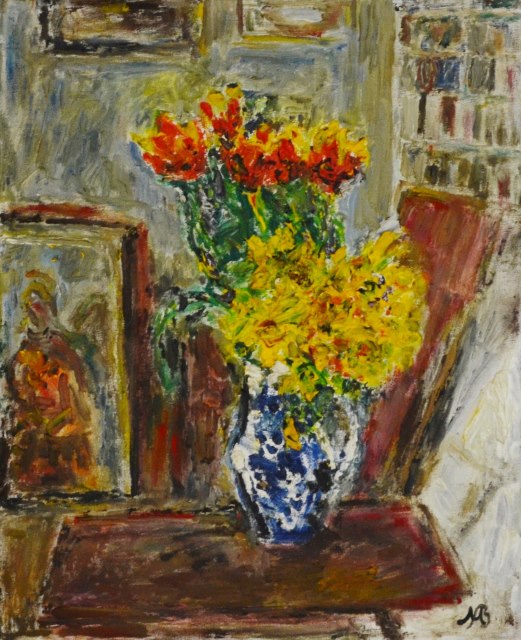 Painter and teacher born in Trokienniki, Poland in 1905. Studied Fine Art at Wilno University, 1921-23, then at the Academies of Fine Arts in Cracow and Warsaw, 1923-27. During the second World War, as a captured Polish soldier, he was imprisoned by the Germans, on liberation he became a teacher in Rome to Polish art students. In 1946, he settled in Britain, where he founded the Polish School of Art.

Bohusz-Szyszko’s work was both Expressionist and Coulorist, with an elegant, yet strong palette. He showed both widely in Britain and Europe, with many solo exhibitions. A retrospective was held in 1963 at Drian Galleries. In 1981 the National Museum, Gdansk, held a show. He was part of the 1993, City Arts Centre, Edinburgh, Exhibition ‘Polish Roots – British Soil’.

Works are in many Public collections, including The Bishop’s Palace and Chapel, Winchester, the National Museums of Warsaw, Gdansk and Wroclaw. Bohusz-Szyszko, was a spiritual person who was concerned with the wellbeing of his fellow man. In 1977, he became artist-in-residence at the St.Christopher’s Hospice in South London, and in 1980 married Dame Cicely Saunders, the founder of the modern hospice movement. He died in 1995 at St.Christopher’s and 60 of his paintings are on permanent display there. On the opening of his first London show in 1959 at Grabowski Gallery, the Guardian’s art critic, Eric Newton described Bohusz-Szyszko, “one of the great artists” of his generation.