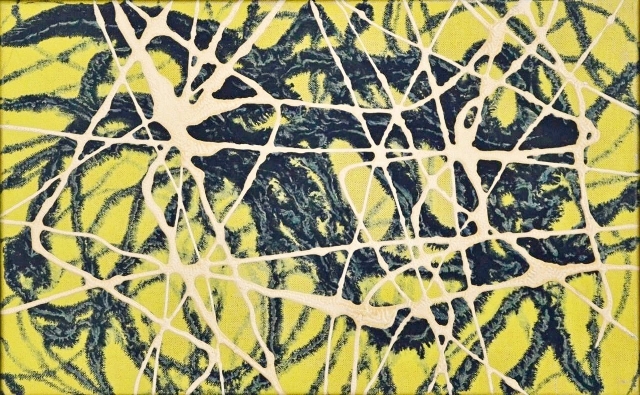 His work was included in British Abstract Art at Gimpel Fils in 1951 and was displayed alongside with the works of British abstract artist John Milnes-Smith, in that same year they also exhibited at The Mirror and the Square organised by the A.I.A. J D H Catleugh was part of what Herbert Read described as the ‘Tachiste Tornado’ of the 1950s; ( Herbert Read-Art Since 1945, Thames & Hudson, Chapter 7) and he showed a highly refined sense of organisation in his work, perhaps a reflection of Catleugh’s early architectural training.In 1949 J D H Catleugh, influenced by Jackson Pollock, became fascinated by the possibilities of the ‘drip and pour’ technique. He eliminated his own colour mixtures and worked/poured directly from the paint manufacturer’s tin.

The result is a rhythmic and polychromatic ‘net-work of trails which loop, entwine and lose themselves in an indecipherable complexity’-(Review of Gimpel Fils exhibition, Manchester Guardian, 19-1-1953 ) These ‘Space/Time’ paintings may remind us of ‘electrons around a nucleus’ or ‘the trial of a jet plane‘,-(Colin St John Wilson, Notes on paintings by J D H Catleugh, January 1953 ) but they have no subjects as such.

Titles like Space-Time Configuration and Bi-planar Structure remind us that these are products of a post atomic world and as contemporary in 2007 as they were then.October 1953 Painting onto Textiles exhibition at the ICA organised by Hans Juda, editor of The Ambassador to promote textile designs by contemporary painters. Three designs from this exhibition were put into production by David Whitehead Ltd, these same textile designs were included in Artist’s Textiles in Britain 1945–1970 exhibition at the Fine Art Society 2003.By the mid 1950s J D H Catleugh, moving towards Victor Passmore and the British Constructionists, was working on a series of paper collages. Vertical black stripes were cut and pasted down, their orderly rows broken only by the addition of strips of coloured paper.

Oswell Blakeston described them as having the effect of ‘looking through slats at a confetti world’’-(Oswell Blakeston, Popular Art, Art News & Review, 30-10-1954 )In 1956 the Tate Gallery exhibition, Modern Art in the United States, devoted one gallery to abstract expressionism. It was followed in 1957 by the landmark Metavisual Tachiste Abstract exhibition at the Redfern Gallery, which registered the influence of the Americans. This American impact was strengthened by the 1959 exhibition of abstract expressionism, New American Painting, also at the Tate Gallery.