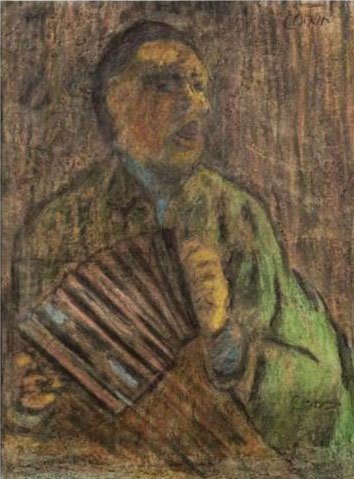 Painter and illustrator, mainly in coloured crayon and watercolour. Born in Belfast, where he was celebrated for his portrayal of working-class life in Ulster. Began studies at Belfast Government School of Art in the 1890’s. Leaving to become a teacher at the Municipal Technical Institute. After a year he was employed for the next ten years at the lithographic firm of David Allen & Sons in Belfast. Thereafter, he became a full time painter.

During both World Wars, he was appointed by the British government, as an official war artist to record both troops and munition workers. In 1920 he moved to London, forming friendships with many artist and in particular, Sir John Lavery and Augustus John.

Conor exhibited at the Royal Academy in 1921 and in Dublin, some 200 works, at the Royal Hibernian Academy. Awarded the OBE in 1952 and elected President of the Royal Ulster Academy in 1957, a post that he held until 1964. The RUA’s permanent collection holds more than 50 of his crayon and watercolour works. Arts Council of Northern Ireland held a Retrospective at Ulster Museum in 1968. Works in numerous public and private collections world wide.