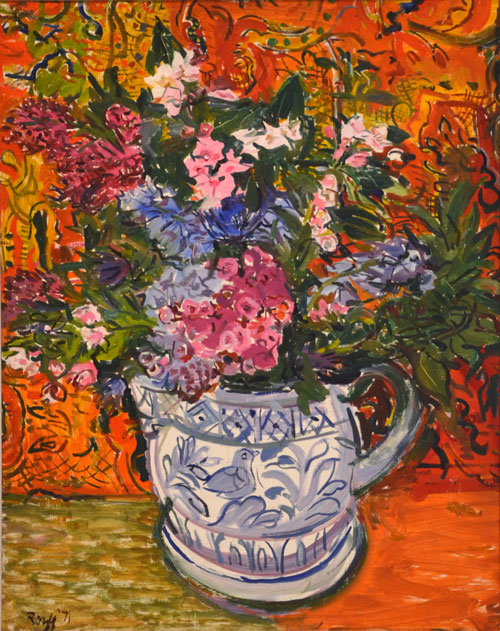 The Blue and White Jug

Benedict Davis (Beatrice Rozenberg) was a student under Sir Thomas Monnington and Sir Walter Russell at The Royal Academy Schools, and was awarded the Silver Medal for Portraiture. She exhibited at the Royal Academy Summer Exhibitions in 1935, 1939, 1941 and 1946. One of Rozenberg’s portraits was sold at the Summer Exhibition to John Spedan Lewis of John Lewis Partnership, and hangs at Leckford near Stockbridge in Hampshire. At this time she exhibited under the name Benedict Davies.

Thinking that women painters were unfairly patronised she switched Beatrice for Benedict and combined that with own family name Davies. She met and married Zigmund Rozenberg in 1949 and consequently exhibited under the name Beatrice Rozenberg. Once her Sons were settled at school, Rozenberg set up her studio in an old shop in Ledbury Road, Notting Hill. Possibly inspired by Soutine and Kokoschka, she decided to paint a series of Notting Hill local characters, habitues of Portobello Road.

Far from being fashionable area, Notting Hill in the early 60s (sixties) was a working-class, down-at-heel area, home to a large immigrant West Indian community and a few bohemian artists such as the Australian painter Brett Whitley and later David Hockney attracted by cheap studios and a relaxed attitude to artists.

There was also a posthumous one-man show of her work at the John Denham Gallery in Hampstead in November 2002. A collection of her Holocaust paintings are held by The Weiner Library in London.