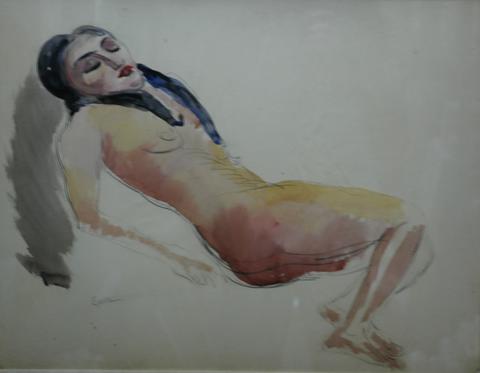 Sculptor of monumental works and portraits, water colourist and draughtsman. Born in New York of Polish Jewish parents, he was interested in art from childhood. Aged about 16 attended classes at the Art Students’ League and at night school.

Money earned by illustration paid for him to travel to Paris, where he studied the work of Rodin and other sculptors, also attending the Ecole des Beaux-Arts and Academie Julian. Moved to London in 1905, becoming a British citizen two
years later.

He became a controversial figure as the result of
several commissions: figures on the British Medical Association building in the Strand, London, 1907-8; the Oscar Wilde Memorial, Paris, 1910-11; and the W H Hudson Rima memorial in Hyde Park, 1925. After meeting advanced artists such as Picasso and Brancusi in France just before World War I Epstein became associated with the Vorticist movement in England, producing his Rock Drill construction in 1913-14.

Successful both as a modeller and a carver, Epstein continued for several decades to produce busts of notable people, such as Joseph Conrad, Albert Einstein and Somerset Maugham; to create religious and other public sculptures; and to produce controversial images such as Genesis and Adam.

Founder-member of the LG, exhibited many times at the Leicester Galleries and had first one-man show at the Twenty-One Gallery, in 1913. Published his autobiography Let There Be Sculpture, 1940. Knighted 1954. Many galleries, including the Tate, which held a retrospective in 1980, have his work. Lived in London.