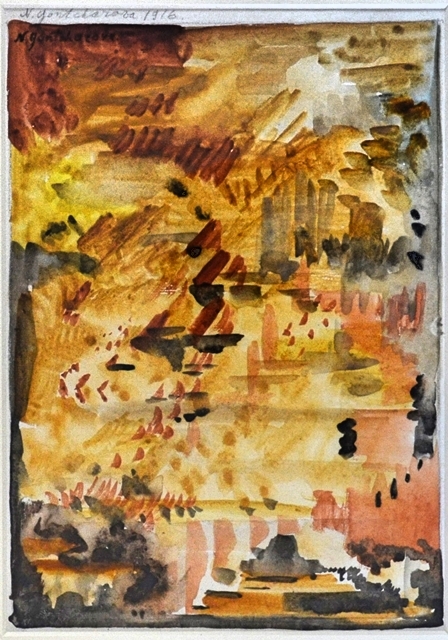 She was born Natalia Sergeevna Goncharova on June 4, 1881, in Nagaevo, near Tula, Russia. Her Great aunt was Natalia Goncharova-Pushkina, wife of the Russian poet Alexander Pushkin. Young Goncharova was brought up in a highly intellectual environment of her family. She studied sculpture at the Moscow Academy of Art, and won a Silver Medal for her art-works. After three years of studying sculpture, she switched to painting in 1904. She drew inspiration from the traditional Russian folk art, as well as from the imagery and the primitive aspects of the early Russian icons. Goncharova also experienced an early exposure to the haunting beauty of the unspoiled nature of the Central Russia.

During the 1900s, Goncharova made her trips to European capitals and had a taste of such emerging styles as Impressionism, Fauvism and Cubism, through her exposure to the works of ‘Vincent Van Gogh’, Pierre Bonnard, Paul Cezanne, Henri Toulouse-Lautrec, Henri Matisse and Pablo Picasso. In 1900 Goncharova moved together with artist Mikhail Larionov. Together they developed Rayonism, a style inspired by technology and modernity with the emphasis on dynamic rays of contrasting color.

In 1911 Goncharova became a founding member of Der Blaue Reiter group of avant-garde artists led by Wassily Kandinsky. She participated in the first show of Der Blaue Reiter in Munich. In 1912 she took part in organizing the Russian avant-garde group “Osliny Khvost” (aka.. Donkey’s Tail), together with her partner, artist Mikhail Larionov. At that time she was inspired by the lectures by the Italian ideologue and founder of Futurism Filippo Tommaso Marinetti in Moscow. Marinetti’s lectures about Futurism and the influence on masses of people through art, provoked Goncharova and Larionov on making their own lectures on Futurism, albeit their Russian lectures were less politically charged compared to their Italian counterpart.

Goncharova was also a graphic artist who created design and illustrations for books in the style of Futurism. In her innovative compositions, Goncharova often broke traditional forms by introducing an intricate fabric of images intertwined with music notation, letters, fragments of words and textual messages. In 1913 Goncharova had her first and biggest “one-man” show which covered the enormous range of her talent, from her Neo-primitive works and Russian icon-inspired images, to her most modern endeavors in Cubo-Futurism and Rayonism.

At that time Goncharova emerged as an important and also a highly controversial figure, often breaking social conventions as well as rigid cultural dogmas. She was among the first women in Russia who shocked the public with her casual cross-dressing, and also with her sharp comments on art and society.