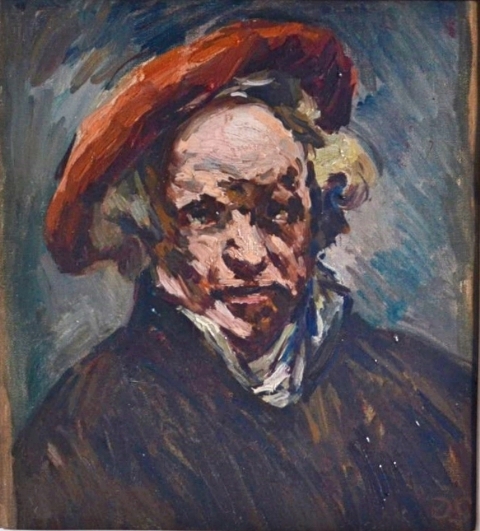 Oil on Canvas, signed with initials

Paul Roche then by descent to Vanessa Lindgren (nee Roche). Note:the collection at Charleston has a small ceramic tile painted with this image by Duncan Grant.

Duncan Grant was born in Rothiemurchus, Inverness-shire, but spent his early years in India. Studied at the Westminster School of Art, then under Jacques-Emile Blanche and the Slade School of Fine Art. During the period 1907-09 lived in Paris, where he met Matisse. Grant contributed to Roger Fry’s second show of French Post-Impressionists in 1912; and became a member of the Camden Town Group and later London Group. Grant became closely associated with Roger Fry’s Omega Workshops.

He was a central figure in the Bloomsbury group. Moved to 21 Fitzroy Square in 1909 and thereafter became a regular at Virginia Woolf’s and Adrian Stephen’s Thursday evening gatherings. Sharing with Roger Fry and Vanessa Bell a commitment to the decorative arts as well as to painting on canvas, he became the co-director of the Omega Workshops in 1913.

Lived with Vanessa Bell in Charleston from 1916. Grant held his first one man show at the Carfax Gallery in 1920. Had a number of solo exhibitions with Agnews. Also exhibited in group shows at the Leicester, Redfern, Lefevre and Leger Galleries. His work is represented in many public collections, including Tate Gallery, which had a retrospective exhibition in 1959, with Arts Council tour.