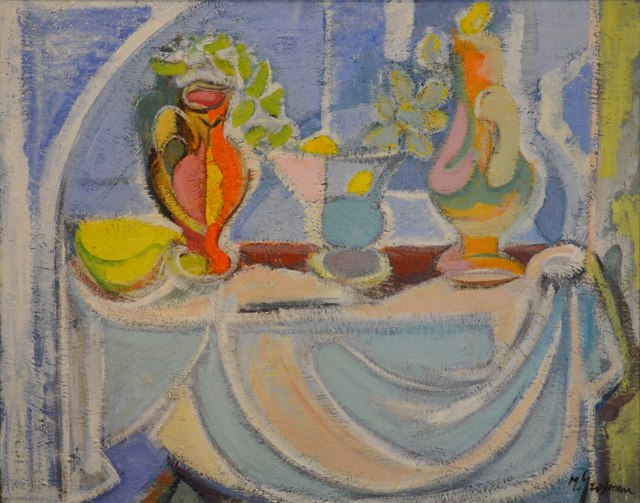 Private American collection. The counterpart picture is in the collection of Universal Limited Art Editions.

Born in Poland, he knew from an early age that he wanted to be an artist. In 1917 thanks to a local benefactor, he had funds to travel and attend the Fine Art Academy in Dresden, where his work was soon noted. In 1919, he worked under the Academy’s new Professor, Oskar Kokoschka (1886-1980). After completing his studies and with introductions from Kokoschka, he moved to Berlin. There, as a struggling artist of twenty-nine, who according to Tatyana Auguschewitsch was ‘flamboyant, bohemian, poor and contemptuous of worldly success’, all of which made him irresistible to her, she being from a wealthy non-Jewish family, they married on 27th June 1931. She was banished from home but willingly left luxuries behind to live with Maurice in a tiny attic.

By the end of 1931, Berlin was no place for bohemian, let alone Jewish artists. It was in this climate that they left for Paris. Maurice immersed himself in work and in a new circle of friends that included Chaim Soutine, Jacques Lipchitz and Ossip Zadkine, as well as many others who later came to be known as the School of Paris. At this time, Maurice’s work was semi-cubist. In 1937, he exhibited in the Salon des Independents and the Exposition International, as well as other commercial galleries.

In November 1940, two days before the Nazis took Paris, Maurice and Tatyana fled. They survived three years of danger and flight, crossing the Pyrenees on foot, finally reaching friends in Barcelona. With the help of the Hebrew Immigrant Aid Society, they arrived in New York on 23rd May 1943, and settled in a one-room, fifth floor walk-up on 8th Street. For the next twelve years, Maurice eked out a living painting and teaching, but in New York at that time, Paris School work found little favour. The Niveau Gallery in New York held solo exhibitions of his work in 1947 and 1949.

In 1955, Maurice suffered a heart attack, unable to paint or teach for some years, and finding the stairs on 8th Street too much, they moved to a cottage in West Islip, Long Island. From this unfortunate beginning, Maurice and in particular Tatyana created a fine art printing and publishing business, Universal Limited Art Editions (ULAE) which is still today the foremost fine art publisher in America. Their association with the Metropolitan Museum of Modern Art (MOMA) and the greats of American Art is legendary.