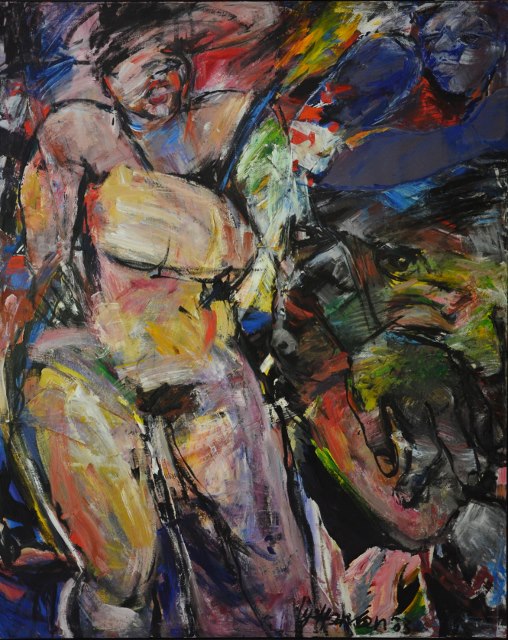 Born 1936, Falkirk, Scotland. Attended Edinburgh College of Art, 1955-59, where her teachers were Sir William Gillies and Sir Robin Phillipson; 1961 studied fine art under David Talbot Rice and Giles Robertson at University of Edinburgh. She won many awards and scholarships including Prix de Rome. Since 1985, she has worked for regular periods abroad, including Artist in Residence, Ecole de Peinture, Castelnau de Montmiral, Tarn, France. Hansen had a studio in Berlin and was present when the Berlin Wall came down, an event that together with reading in the American press of the
cause celebre, murder trial of Mrs Harris, headmistress at a private college, who shot her unfaithful lover, an eminent cardiologist, and author of the famous ‘Scarsdale Diet’, greatly affected her work thereafter. She saw this event as emancipating. In Hansen’s paintings of Mrs Harris we see this new style, the empowering of the under-dog.

Today, Lys Hansen must be regarded as one of Scotland’s most important Figurative Expressionist painters, whose work more than any other relates to the female condition.