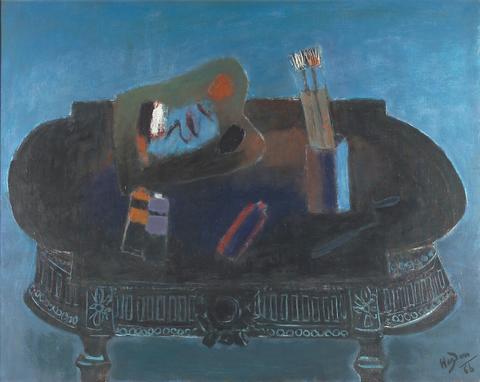 Born 1883 in Warsaw of a prosperous middle-class family. In 1905 he abandoned his ambitions as an engineer to concentrate on painting. In 1907 he went to Paris, discovering the new trends in modern art, this decided him to start afresh. His instructors in Poland had been academic disciples of the German school; in France, he began to study the work of Cezanne. In 1916, he came into contact with the dealer Leonce Rosenberg, who encouraged him throughout the ensuing years.
Hayden??s ‘Three Musicians’ painted in 1919 and now in the Museum of Modern Art, Paris, remains one of the great masterpieces of Cubism. In 1922, Hayden reverted to a more naturalistic style, concentrating mainly on still-life composition, later on landscapes in which he sought to develop a style as a plaine air painter, until 1949, he continued to experiment in this manner.
During the war years, the Germans looted his Paris studio, so that much of his earlier work is now lost. From 1949, however, he returned to his earlier cubist manner, developing it in a new style of still-life composition, in which he excelled as an unusually refined artist, elegant calligraphy and richness of colour marked the artist??s last years.