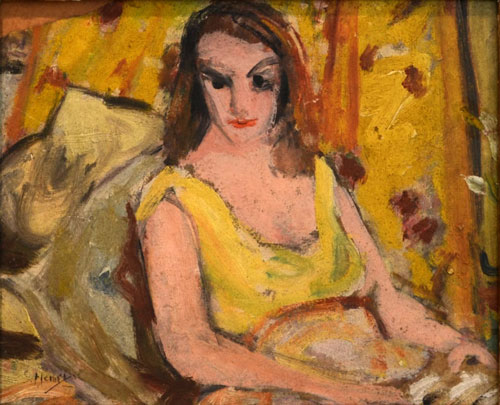 Oil on Paper laid to Board

Born in Peterhead, Aberdeen, as Emily Grace Mitchell, she studied art at the Blanc Garrins Academy, Brussels, and the Delecluse Academy, Paris. She was also a pupil for a while under André L’hote. In Paris she met the Irish painter Paul Henry (q.v.), whom she married in 1903. They settled in England and Grace began exhibiting in London at the RA, the Leicester Galleries, and the Fine Art Society.

Along with her artist husband, she sent works to the RHA from 1910 onwards, and two years later they left England for Achill Island, where they spent seven productive years painting the local people and landscape. In 1922 she was represented at the Irish Exhibition in Paris with five works; later she was included in a similar loan exhibition in Brussels in 1930. Both she and Paul were founder members of the Dublin Painters group.

They exhibited together at the Stephen’s Green Gallery, Dublin, and the Magee Gallery, Belfast. However, the pair were formally separated in 1934. Grace took to traveling and painting in France. Her work was boldly conceived in vibrant colours and decisive brushwork; “her painting”, commented the Studio in 1939, was “all poetry”. She continued to exhibit both in London and Dublin, notably with the Waddington Galleries and at the RHA. Although never made an Associate, she was elected an Honorary RHA in 1949. Her work is in many major public collections in Ireland.