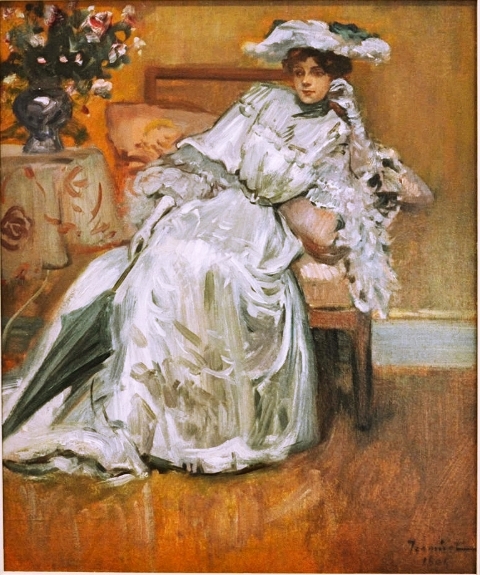 Pierre-Georges Jeanniot was the son of Pierre-Alexandre Jeanniot, director of the Ecole des Beaux-Arts, Dijon, and studied with his father. Although he first exhibited at the Salon in 1872, his early life was spent in the army. He became a captain, fought in various military campaigns and was wounded and taken prisoner, before resigning his commission in 1881, in order to concentrate on becoming a painter.

Jeanniot was a friend of both Degas and Manet, indeed the Bibliotheque Nationale in Paris has a black chalk portrait of Degas by Jeanniot dated 1890. The older artist stayed with Jeanniot in his home in Burgundy and he taught him much, including how to make monotypes. Manet also corresponded with him, giving him advice and encouragement on how to approach his subjects.

Jeanniot worked extensively as an illustrator of books (La fille Elisa, 1896, Contes choisis de Maupassant, 1896, Le Misanthorpe de Moliere,1907 to name but three) and he collaborated on contemporary publications like La Vie Moderne. However, it is for his elegant drawings and paintings which epitomize the Belle Epoque that he was justifiably famous and is best remembered today.