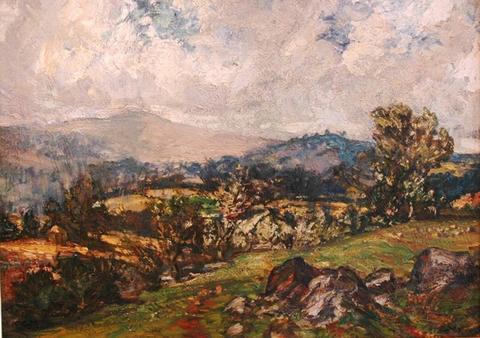 The Edge of Dartmoor

He studied at Royal Academy Schools, 1887-9, winning several prizes, having been earlier tutored and encouraged by his father, a miniature painter who had served in the Portuguese diplomatic service. Moira failed to win the Royal Academy gold medal only by the casting vote of its president, Sir Frederick Leighton.

On leaving the Schools Moira immediately set up a studio in London and received a number of important portrait commissions. Showed at Royal Academy from 1891 and IS from 1899. Was to become a member of NPS and RWA and hold senior positions in ROI and RWS.

Moira went on to become professor of mural and decorative painting at Royal College of Art, 1900-22, then principal of Edinburgh College of Art, 1924-32. In addition to teaching he carried out a formidable number of large commissions, including decorations for the old Trocadero Restaurant, in Shaftesbury Avenue; ceiling for the boardroom of Lloyd’s Register; a frieze for the Passmore Edwards Free Library, in Shoreditch; work at the Central Criminal Court; as well as work in private houses, church decorations and many easel pictures.

His paintings had a grand manner feel with rich colours. His works are held by many public galleries including The Tate.