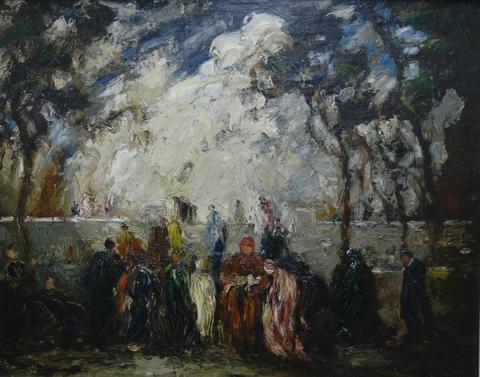 Landscape and genre painter in oil. Born in Liverpool, son of Edwin Mostyn, an artist. Father of the artist Marjorie Mostyn.

Studied at the Manchester Academy of Fine Arts, where he won first prize for life drawing, and under Herkomer at Bushey. Particularly noted for his ‘Fete Champetre’ paintings.

Exhibited at the RA. from 1891, also in the provinces, and extensively abroad. Principal works include Childhood, The Garden of Peace, In the Heart of the Cheviots and Forest Lovers. Represented in several public collections. Lived in London and later in Torquay. Died on 22nd August 1930.