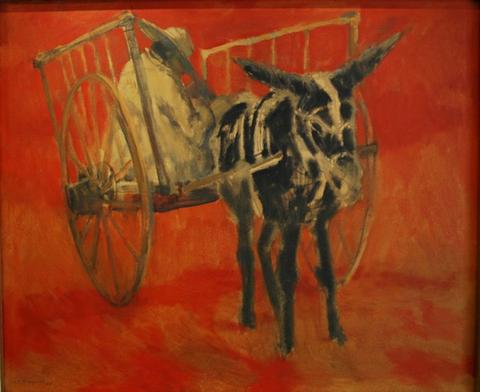 After education there he studied art at Edinburgh College of Art, 1946-9, under William Gillies, John Maxwell and William MacTaggart. A travelling scholarship took him to France and Italy, then he did a postgraduate year, teaching at the College. He also taught at Gray’s Art School in Aberdeen and at West Surrey College of Art and Design, taking early retirement as head of the painting school in 1984.

Muszynski’s best work has been a dialogue of the human condition and the working of the land. This was fostered by his regular visits to Mexico begun in the 1960’s, and his association with the family of the great Mexican painter Diego Rivera.

He settled in Liphook, Hampshire, but also worked around his second home in Ibiza.

Muszynski’s richly coloured paintings were shown extensively in solo exhibitions in London, the provinces and abroad, later shows including Pallant House and Canon Gallery, both in Chichester, and a retrospective in Poznan and at the Polish Cultural Institute, London.