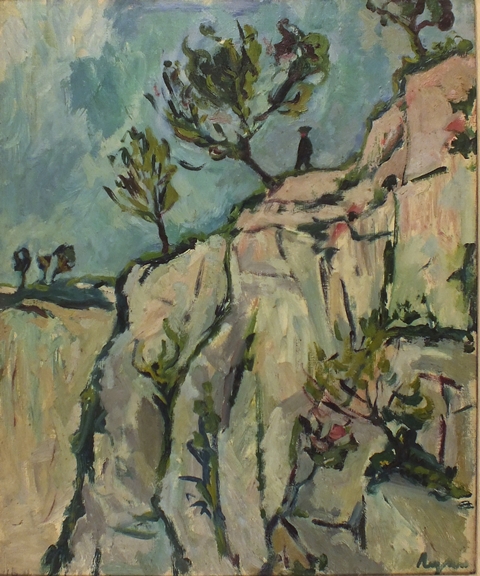 Exhibited Redfern Gallery, London April 1951. Where purchased by Eardley Knolly's Note: Painted by Ryan, Summer 1950 when staying at Villa Campagne Orovida. See Adrian Ryan 'Rather a Rum Life', Julian Machin. We are grateful to Julian Machin for help in cataloguing this work.

Painter and teacher born in London, son of the artist Vivian Ryan. Studied at Architectural Association, 1938-9, then Slade School of Fine Art. From 1948-83, Ryan taught at Goldsmiths’ College School of Art. Over the years he painted in a variety of places, including Cornwall, France and Suffolk, being latterly based in London and Suffolk. As well as appearing in many group shows, including London Group and Royal Acedemy, Ryan had a number of one-man shows, starting with a series from 1943 at the Redfern Gallery.

Later solo exhibitions included University of West Virginia, 1978, Gallery 10, 1980. Retrospectives were held at The Minories, Colchester, 1985, the National Trust, 1994 and a solo show in 1996 at Eton College. A memorial show was held at Redfern Gallery in 2000, another at Penlee House Gallery and Museum, Penzance, 2002. An exhibition was held in 2003 at Charleston, organised by Julian Machin. The Tate Gallery hold his ‘Flowers on a Chair’.