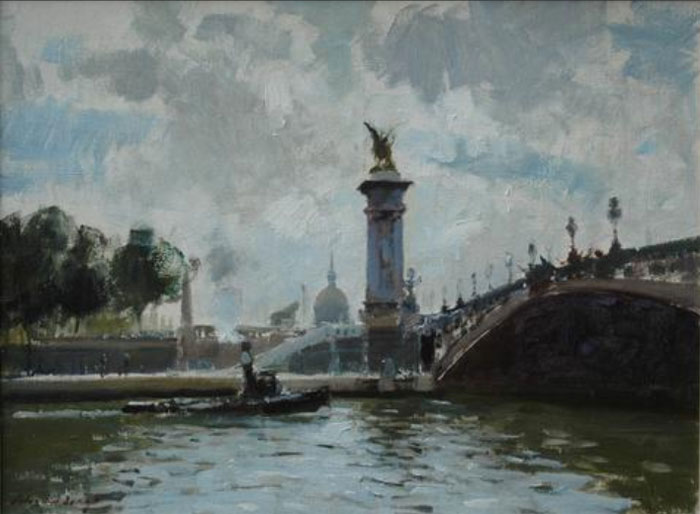 Born in Norwich on 31st March 1910, son of a local coal merchant. At the age of seven he was struck down by a heart complaint and was confined to his bed for some years. He was able to paint scenes from his bedroom window but this interest in art was not encouraged by his parents. However, when recovered he studied at the Royal Drawing Society and won a special prize at age 14.

He was largely self-taught but also received some instruction in landscape painting from Bertram Priestman. When he was about 18 he joined Bevin’s Travelling Show, and subsequently spent much time touring with circuses in Britain and on the Continent. His experiences were recorded in a book entitled Circus Company which he wrote and illustrated. The drawings from this book were included in his first London one-man show held in 1933 at the Sporting Gallery. This was a great success and many other one-man shows in London and abroad followed.

His second book Sons of Sawdust was published in 1934, and this related to circus life in the West of Ireland. In 1936 some 42 of his paintings were used to accompany John Masefield’s poems in The Country Scene, and he later worked with Masefield on Tribute to Ballet 1937 and A Generation Risen 1942. Served with the Royal Engineers 1939-44 and often painted during that time in Italy with Field-Marshal Lord Alexander.

His war pictures were exhibited in 1946 at the Norwich and Bristol Municipal Galleries. Published Peace in War 1943, High Endeavour 1944, With the Allied Armies in Italy 1945, and his autobiography A Canvas to Cover 1947. He worked much in East Anglia and was a member of Ipswich Art Club, also of the Norwich Art Circle. Elected RB.A. 1946, A.R.W.S. 1957 and RW.S. 1959. In 1957 an exhibition of his work was held at St. James’s Palace and this consisted of pictures painted during the Duke of Edinburgh’s world tour. He was much travelled and visited many countries, including Spain, Morocco, Italy, France, Greece, Hong Kong and Antarctica. A keen sailor, he used to visit Paris by sailing across the Channel to Le Havre and then up the Seine, painting as he went. He lived at Ludham in Norfolk for some years and died in London on 19th
January 1974.