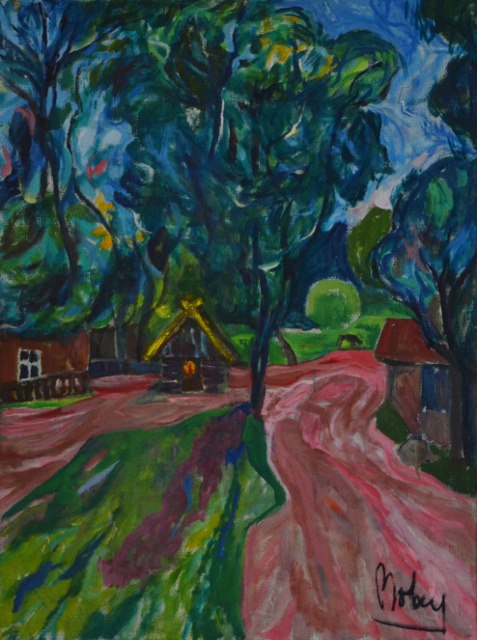 Born in Russia in 1917, he later lived and worked in Leningrad. After graduation in 1936, he attended the Leningrad Institute of Painting, Sculpture and Architecture under Pavel Shillingovsky, Ivan Bilibin, Konstantin Rudakov and Leonid Ovsannikov. Due to the Second World War, he and the Institute were evacuated to Samarkand in Central asia in 1942. Later that year, Vovkushevsky was conscripted into the Red Army, he survived frontline combat, and took part in the liberation of Poland and the Baltic Republics, where he was wounded and subsequently highly decorated for his service to his Country.

After demobilization, Vovkushevsky returned to his art studies at his old Institute, where he graduated in 1949, and together with a number of his fellow pupils he entered the studio of Victor Oreshnikov. From this period until 1959, he taught painting and drawing at Leningrad Higher School of Industrial Art. Throughout this period he also exhibited studio works and monumental pieces.

He was a member from 1949 of the Leningrad Union of Artists (later named St.Petersburg Union of Artists). Though considered a Russian Realist Painter, Vovkushevsky’s work, even as early as the 1930’, was influenced by the French artists Monet, Bonnard and Derain. His distinctive style and palette, use of pure colour and semi-tones are present throughout his work, whether landscape, portrait or still life.

A major exhibition of his work was held in St.Petersburg in 1995 and works are held in public and private collections worldwide.