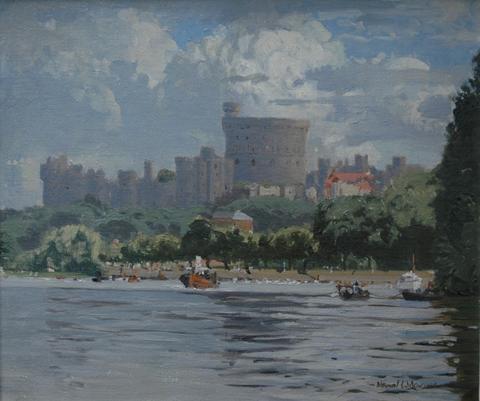 Painter in oil and watercolour, poster designer and printmaker, born in Cambridge.

Although early on he studied figure painting in Paris, further study with the river and coastal painter Louis Grier in Cornwall reinforced Wilkinson’s growing belief that he should concentrate on marine subjects, of which he became a master.

He also studied art at Portsmouth and Southsea School of Art and later taught there. His career as an illustrator began with a first acceptance by the Illustrated London News in 1898, a publication with which he was long associated.

He travelled widely abroad, in Europe, the Mediterranean area and in North and South America. In both world wars Wilkinson was important in the development of camouflage techniques, and he presented a big series of pictures concerned with the war at sea to the nation.

He showed widely, including the Fine Art Society, RBA, ROI, RI and Walker Art Gallery, Liverpool. Works are in many public collections in Britain and abroad. His book A Brush with Life was published in 1969.