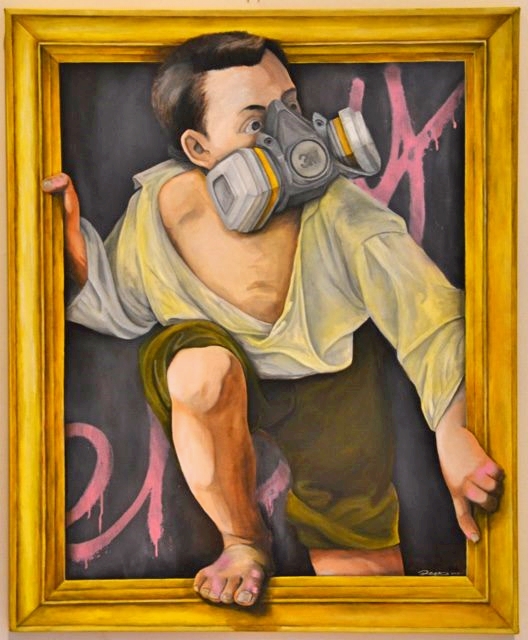 Private Collection. Note: This is the original painting for the numerous limited edition print series of 'Escaping Criticism'.

For the past 27 years, London artist Zeus has been drawing inspiration from urban culture to create dynamic, experimental compositions that have re-defined traditional graffiti art with his innovative three dimensional sculptures, paintings and typography, that reflect both his background on the streets and his formal training at Chelsea College of Art.

Born Dean Zeus Colman, his middle name naturally became his tag. It could be seen across London throughout the 80s and, still in his teens, Zeus earned the reputation of being a prolific writer. His work caught the attention of many of the influential faces of hip-hop at the time, figures like Tim Westwood who commissioned him to create designs for one of the first hip-hop clubs, Spatz, in 1984.

Through Westwood, Zeus also had the opportunity to work with the likes of Paul Oakenfold, making backdrops and posters for artists signed to his Def Jam label, including Dougie Fresh and Whizz Kid. When house music took off Zeus also received commissions from the warehouse clubs that sprung up around the capital, such as West World at the Brixton Academy. All these contacts served as an effective catalyst for his career, encouraging him to think beyond the limitations of spray paint and walls.

In 1996 Zeus exhibited at the Victoria and Albert Museum before holding his first solo show at Westbourne Studios. He later went on to work with Jade Jagger to re-design the windows and display cabinets for Garrards, the Crown Jewllers.

Zeus has worked with numerous community centres throughout London, teaching young offenders graffiti techniques, and helping to establish the art form as an effective, positive outlet for the energies and creativity of teenagers. He was even invited to teach Prince Charles how to spray paint as part of a Princes Trust initiative.

Zeus returned to college and secured a place at Chelsea College of Art to study for a degree in Fine Art, majoring in sculpture. This took his art into three-dimensional form, creating graffiti sculptures out of light wooden sheets.

Over the next decade interest in Zeus intensified. He was described as a 3D graffiti pioneer by The Face magazine and his work appeared at a variety of venues throughout the UK, including the Victoria & Albert museum as part of its StreetStyle exhibition.